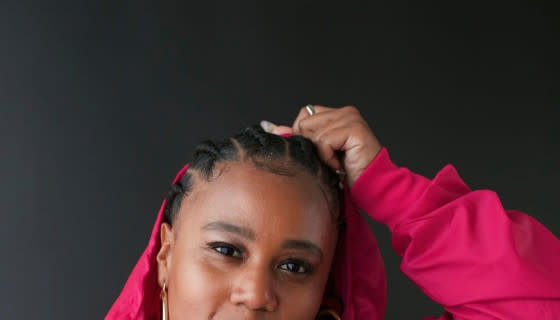 Claim to Fame: Jameelah has been featured in campaigns for Footlocker, Nike, and Girlfriend Collective. She is the founder of Transparent & Black.

Yasmine Jameelah’s first attempt at modeling fell flat. “I applied to a bunch of agencies and nothing happened. And if I’m honest that I started to feel really discouraged and really questioning, which is horrible, but like questioning my own beauty, questioning my worth and feeling like, okay, well maybe, you know, like I’m, you know, like not the look that companies want or maybe I’m not pretty enough. Maybe I’m not small enough,” she told HelloBeautiful.

The lack of response triggered her initial ideas about the profession. Everyone was telling her she was beautiful and charismatic enough to compete but the societal cues kept ringing. “I thought in terms of the word model, that models were people that were super beautiful and that, you know, were allowed to take up space, but as I have grown, I have realized that everyone’s allowed to take up space.” She carved out her own space by founding Transparent & Black, a wellness collective designed to combat intergenerational trauma.

She began modeling professionally when she booked her first gig with ethically sourced activewear brand Girlfriend Collective. In the photos she looks calm and powerful. The experience affirmed the idea that she was capable of modeling and today she embraces it as a part of herself. “I’ve just become more comfortable using the word and understanding that being a model is a part of who I am,” she said. “And that it is not a part that I should feel like I have access to or can claim you know, depending on my dress size.”

“Everybody’s journey is different,” she added. “I know some people that have gone the traditional model route, where you take photos – which I have – and, you apply to an agency, you get accepted and then you’re booked on jobs do that way but that was not necessarily my route.”

In her later campaigns, she was one of the models being tapped to represent a new phase in inclusive activewear offerings by major brands like Nike, and Footlocker by finding her own voice. “I’m happy that we’re at a time now where so many people are not only demanding inclusivity with sizes, but that they are also realizing so many marks that have been missed,” she said. Together they pushed out campaigns that allowed every type of woman to envision themselves in the activewear being presented.

“I often find that so strange because there’s so much, you know, slander and so much negative commentary towards the plus-size community specifically plus Black women. And the same companies that slander do not provide active wear to fit us that makes us feel sexy, that makes us feel strong. You know I went through this period where I was shopping and I was like, you know, what, if I see another Black outfit I’m going to scream like, this is ridiculous!”

She noted the industry still needs work. “A lot of politics I think could be changed a lot more opportunities needs to be given, even in the plus community, we often see you the plus size women, with the hourglass shape and no stomach, and while everybody is beautiful and everyone should feel represented, that is often the only example that you see a plus-size women,” she said.

“It is important to make sure that we have, uh, just like accurate representation of what all bodies look like. and that we make, you know, all women feel included, not just that particular woman, but women with stretch marks,” she continued before adding. “I have stretch marks on my stomach.”

Jameelah uses some of the wellness practices Transparent & Black promotes to prepare for photoshoots so she can best serve the client and the women who are absorbing the images they create together. She considers wellness vital to “getting yourself in the right space.”

“I like to have a lot of quiet before I go to shoot things. So that way I can stay in the best space mentally,” she said. Like other forms of labor modeling requires forethought and preparation from the crew and the talent.

“It’s definitely work. I think people think that it looks really pretty in the end result, a lot of it is working with the photographer, making sure that you’re collaborating with them, doing what they need you to do, and then travel, if you have to go somewhere all of it is work.”

She also uses her experiences as a founder to advocate for herself without the help of an agent.

The model industry’s glamour is partially propped up by a lack of transparency that makes it easy for things like standard day rates to be a mystery. This makes getting answers super important for those who want to understand the business.

“There needs to be fair compensation for models, and more opportunities as well for Black women and for women of color, but they can be able to have the same opportunities and the same access as their counterparts,” said Jameelah.

“I definitely think that models should have the same respect as anybody else,” she added.

When she is off set she is donating her time and resources to promoting pro bono events, supporting organizations that benefit young girls. “When I think about who I was as a young girl, again, I went through so many pockets of having a lot of confidence, but then no confidence at all. And just trying to navigate through that, so that’s something that’s really important to me, making sure that they feel good.”

She is also “taking as much time to rest as possible,” because “It is beautiful work, but it’s still work nonetheless.”

MODEL MONDAY: Chanel Iman Shepard Wants To Change The World ‘One Smile At A Time’