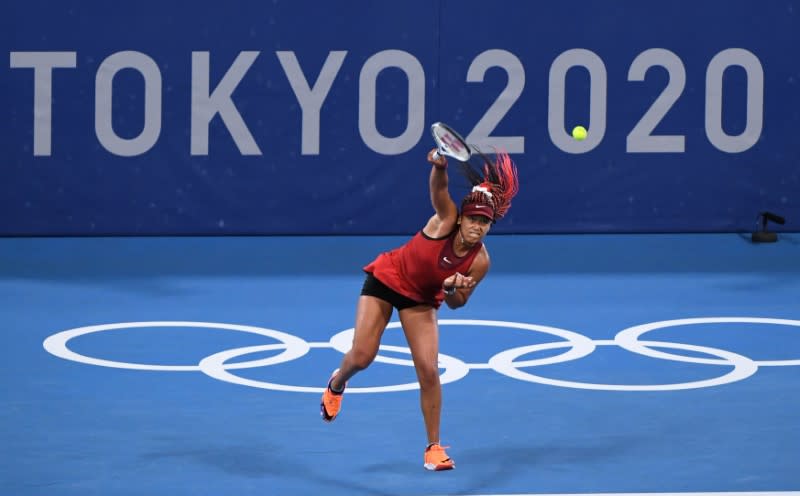 TOKYO (Reuters) – For Japan’s Naomi Osaka, the Tokyo Games were a chance https://www.reuters.com/article/olympics-2020-ten-idCNL8N2OZ06Q to stage a victorious comeback on home turf after several weeks out of the spotlight to focus on her mental health.

And for world number one Novak Djokovic, it was attempting to achieve what no other man had: winning all four Grand Slams in a year plus Olympic gold.

The goals of the two biggest names in the Olympics tennis tournament seemed within reach at the start of the competition but neither ultimately lived up to expectations.

Osaka fell https://www.reuters.com/lifestyle/sports/tennis-japans-osaka-out-tokyo-2020-third-round-2021-07-27 in the third round, while Serbian Djokovic was beaten twice: in the semi-finals by eventual gold medallist https://www.reuters.com/lifestyle/sports/tennis-germanys-zverev-wins-tokyo-games-mens-singles-gold-2021-08-01 Alexander Zverev of Germany, and a day later, by Spain’s Pablo Carreno Busta in the bronze medal match.

Both Osaka and Djokovic admitted the pressure to perform was too much to handle, joining a conversation https://www.reuters.com/lifestyle/sports/biles-spotlights-mental-health-tokyo-covid-cases-hang-over-games-2021-07-28 raised at the Olympics by U.S. gymnast Simone Biles and others about the mental burdens shouldered by athletes.

“Pressure is a privilege https://www.reuters.com/lifestyle/sports/tennis-pressure-is-privilege-history-chasing-djokovic-2021-07-28,” Djokovic had said before his loss to Zverev, ranked fifth in the world. He later told reporters he was unable to raise his game due to physical and mental exhaustion, exiting https://www.reuters.com/lifestyle/sports/tennis-no-medal-djokovic-third-straight-games-2021-07-31 without a medal for the third straight Olympic Games.

Osaka, who lit https://www.reuters.com/lifestyle/sports/slimmed-down-ceremony-open-pandemic-hit-tokyo-games-2021-07-23 the Olympic cauldron at the opening ceremony, said she could not cope with the pressure of playing at home in her maiden Games.

Other contenders struggled amid sweltering conditions in Tokyo, with top-ranked Australian Ashleigh Barty crashing out https://www.reuters.com/lifestyle/sports/tennis-australian-world-number-one-ash-barty-out-first-round-2021-07-25 in her first match, while men’s No. 2 Daniil Medvedev lost in the quarter-finals, a round after saying “I can die https://jp.reuters.com/article/olympics-2020-ten-idCNL4N2P4143” in the heat.

The Russian Olympic Committee won three tennis medals, the most of any nation, including a silver for men’s singles finalist Karen Khachanov.