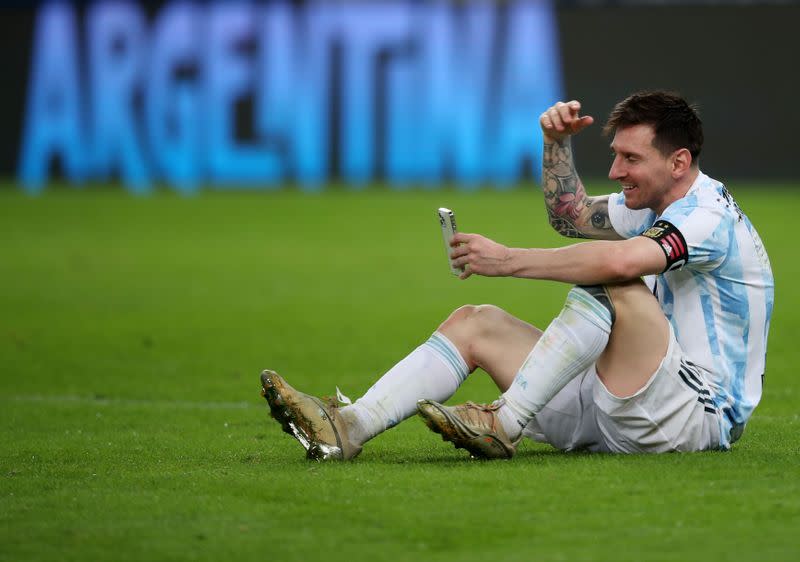 RIO DE JANEIRO (Reuters) – Argentina coach Lionel Scaloni paid tribute to Lionel Messi on Saturday, praising his team captain and revealing he played in the Copa America win over Brazil with an injury.

“If you knew the way that he played in the Copa America you’d love him even more,” Scaloni told reporters after Argentina’s 1-0 win at the Maracana stadium in Rio de Janeiro.

“You can never do without a player like him, even when he is not fully fit like in this game and the previous one.”

Scaloni did not say what the injury was but he showered Messi with praise on a night Argentines took to the streets in huge numbers to celebrate their first international title https://www.reuters.com/lifestyle/sports/argentina-beat-brazil-1-0-win-copa-america-2021-07-11 in 28 years and Messi’s first victory with the national side.

Messi, winner of the FIFA Player of the Year award a record six times, has won every club and individual honour with Barcelona but he had lost all four of his previous finals with Argentina.

The 34-year old had shown his frustration with the defeats, retiring after losing the 2016 Copa America to Chile only to return to the international fold a few weeks later.

“In the end he did not throw in the towel and he succeeded,” Scaloni said.

“We are talking about the best footballer of all time and everyone knew how important it was for him to win a title with the national team.”

“I have a relationship that is different than the (usual) coach-player relationship,” Scaloni added. “It’s closer. We greet each other, we hug each other, and I am eternally grateful to him and his team mates.”