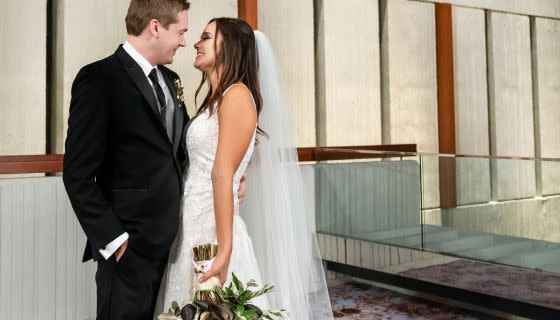 If you watched this season of Married at First Sight, you won’t be surprised by the news that Erik and Virginia have decided to end their marriage. From early on, it was clear Virginia was not ready to give up her single lifestyle and Erik was a little too controlling. Not to mention, the two seemed to consistently argue about fundamental issues.

Viewers were seriously hoping that one or both of them would walk away from one another on decision day.

And while it didn’t happen then, months after, the two have filed documents to separate. According to Showbiz Cheat Sheet, their divorce document has surfaced online and was shared on a “Married at First Sight” fan page. The document can be located Fulton County’s public record access.

Virginia filed for divorce on June 29. At this time, the divorce is uncontested.

Other sources, including Soap Dirt, claimed that the couple had been living separately as early of April of this year. Apparently, the couple were unable to disclose the true nature of their relationship because they were contractually obligated to finish their commitment on the “Married at First Sight” spin-off show, “Couples’ Cam,” that follows MAFS alums in the different stages of their marriage once the 8-week experiment ends.

Speculation about the end of their marriage had been brewing online for some time. The noise got so loud that at one point, Virginia posted an update on her Instagram stories claiming that the two had been quiet on social media in order to protect their relationship.

In her Instagram stories, she shared a picture of herself and Erik, writing:

“Social media can be very toxic. And for that reason, [Erik] and I decided a few weeks back to take our relationship off social media. We did a very public experiment and appreciate all the support but are currently enjoying some privacy. Please be respectful of that and remember to always be kind.”

While the ending of a marriage, is generally a somber occasion, there seems to be one person who’s reveling in it.

When the news broke, Chris Williams, arguably the most toxic spouse the franchise has seen, used the opportunity to taunt both Erik and Virginia, whom he had issues with the entire season.

According to Showbiz Cheat Sheet, in his own Instagram stories, Chris wrote: “This is just a repost! What happened to the condo and the cats? Y’all hated a real upfront dude but fell in love with actors just because they fulfilled your fantasy of real love! It’s B.S.! It was a bad match, but we don’t want to talk about that!” he wrote.

Referencing the altercation he got into with Erik and Virginia during the honeymoon, Chris wrote, “What happened to the great advice y’all had at the ATV scene?” And then later, ““Y’all are only staying together to get your check for couples’ cam! Cut it out!”

Chris, as always, is still deflecting from his own issues. Still, we have to admit that he does likely have a point about Virginia and Erik staying together as long as they did.Crhis