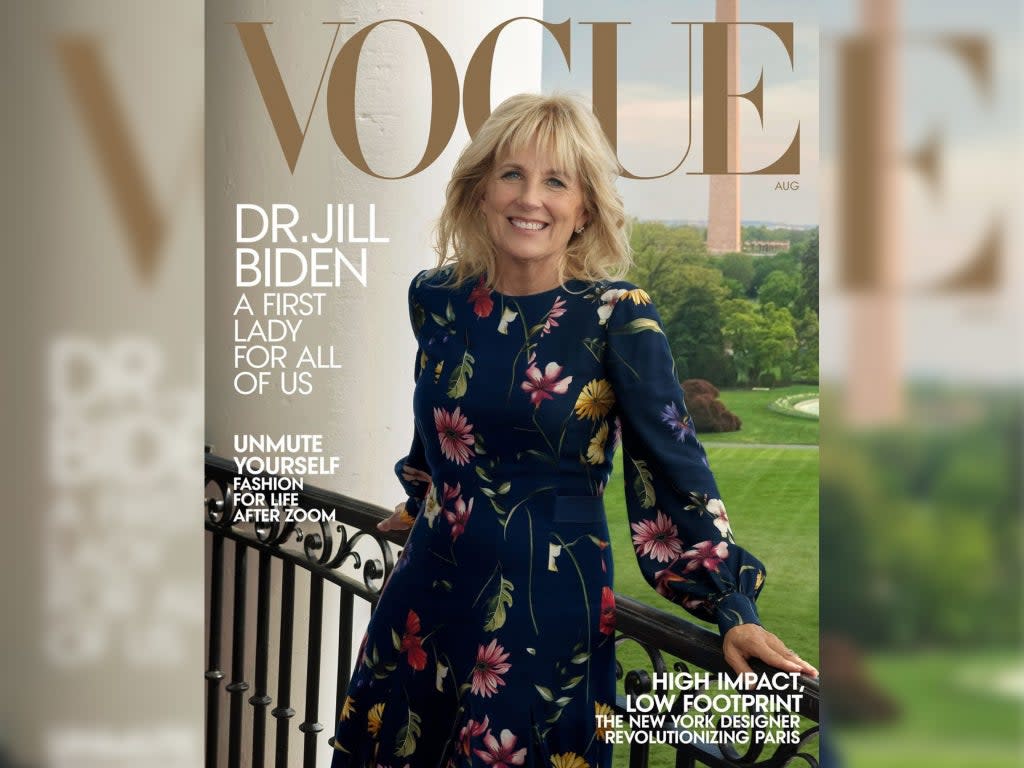 Members of the Trump family are not shying away from expressing their anger after Vogue opted to feature first lady Jill Biden on the August issue of their magazine after a long hiatus, instead of featuring Biden’s predecessor Melania Trump.

The tradition of having a magazine cover featuring the first lady resumed after four years, once Donald Trump exited the Oval Office.

Donald Trump Jr – in a fit of angry sarcasm – posted a photoshopped picture on Instagram of Jill Biden with singer Alice Cooper’s face on it, along with the caption: “Nailed it. Apologies to Alice Cooper”.

Another member of the former president’s family who was vexed by Ms Biden gracing the cover was Lara Trump, wife of Donald Trump’s youngest son Eric Trump. She went on a long rant about Ms Trump being snubbed by Vogue magazine despite her being the “most beautiful first lady”.

“It’s too bad that we didn’t have a first lady who was a model, who was incredibly fashionable, who they could put on the cover of Vogue when Donald Trump was in office,” she said in an interview with Fox Business. “Oh wait, we did! It was Melania Trump!”

She blamed it on some people’s “hate” towards the former president by describing them as “so woke that they could not bring themselves to put an incredibly beautiful woman, I would say the most beautiful first lady we ever had”.

In the edition, Ms Biden talked to writer Jonathan Van Meter in the accompanying feature story titled “A First Lady for All of Us: On The Road With Dr Jill Biden”. On the cover, Ms Biden was seen wearing a navy Oscar de la Renta dress.

Previously, Mr Trump had complained that his wife had not been in Vogue by retweeting a post from the right wing news outlet Breitbart News. “The elitist snobs in the fashion press have kept the most elegant first lady in American history off the covers of magazines for four consecutive years,” the tweet said.

Ms Biden’s appearance has become a talking point on social media websites, with supporters of Mr Trump and current president Joe Biden divided over the issue.

Several chided Lara for calling Ms Trump “the most beautiful first lady”, while others said she deserved to be on the magazine as she was once a fashion icon.

“Note to Lara Trump… The reason first lady Dr Jill Biden is on the cover of Vogue, is because she’s admired worldwide. Melania is racist birther and is despised worldwide. Plus, no one cares about your conniption fit considering you stole millions from shelter dogs,” a user said on Twitter.

“The most beautiful first lady ever, the only one who was a professional model, Melania Trump didn’t get a single magazine cover, while the frumpy, discount store clothed, ‘Dr’ Jill Biden gets dozens of covers and fawning articles,” radio/TV host Mark Simone said.

Ms Trump had a career as a model in Milan and Paris before she moved to New York City in 1996. She forayed into fashion retail with her own jewellery line in 2010 and a skincare line called Melania Marks Skin Care Collection.